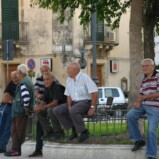 Not long ago I discovered that people from Palermo, as I am, are nick-named “Totucci” in the towns of this province. I wasn’t aware of this name, the one I knew was “Palermitanazzi” a very scornful appellative said by an elderly woman from the province of Agrigento. Not knowing we were from Palermo she said: “It will soon be summer and the “Palermitanazzi” will arrive and muck up our beach.”
When she realized we were from Palermo, she apologized but even though I felt offended.  Reconsidering the situation I must admit the old lady had her justified reasons!
Then I discovered this other appellative, “Totucci”, even this, not to be proud of. Of course it is not fair to make generalizations, as, all those from Palermo are not Totucci but there is an inch of truth.
Let’s begin with the etymology of the word, where does it come from? It is necessary to step back to the 80’s when it bacame a trend to own a “villino”, a small villa in the nearby seaside towns of Palermo. It became a status symbol that meant wealth and prosperity. This “villino”, usually constructed with no sort of permit, on a plot of land crowded with other villette with no sewers nor tap water. The water was often provided by a well dug within the area pointed out by a pseud-expert.
This villino was a fantastic place to enjoy summer vacation. While the father would continue coming and going from Palermo, the wife, children and grandparents remained there enjoying the summer. On Sundays and holidays it was custom to invite the not-as-lucky friends and relatives that didn’t have their own villino, to barbeque and have fun together.
When all these families went to the beach on Sundays, the sight was undeniable: cars loaded with life-savers, beach umbrellas, tents, closable tables and chairs, loungers, balls  and rackets, transistor radios to listen to the soccer game, portable stereos for the music that garanteed a constant “tum tum tum”. Then food, enough to feed an army! Casseroles of pasta al forno (Sicilian-style baked macaroni), parmesan eggplant, cold cuts and cheeses, bread, meatballs, boiled eggs, boiled octopus, rice salads, panelle and crocchè (typical local street food), meat ready for barbeque, coolbags full of beer, coke, orange juice, containers of wine but also of water for an eventual shower, diapers for the children, shovels and pails and the legendary giant watermelon buried in the water edge to remain cool. After enjoying the slices the rinds became boomerangs.
With all that music going on the mothers couldn’t certainly call their children and husband with a whisper so they shouted to call everyone with infinitive decibels. Any reason was justified either to get the children out of the water, warn them not to bathe during digestion, tell them not to disturb the beach neighbors, tell husbands to do their share of child education interrupting their card game or soccer game on the radio, or their beer drinking or barbequing, just for the time necessary to regain their auhority by means of resonant “timpuluna” which are powerful smacks.
Getting back to the nickname “Totucci” its origin derives from the fact that the most common male name is Salvatore which in those years was shortened, especially in Palermo,  with “Totuccio”, now replaced with the more modern Salvo, Toti and Totino.
Today although the villino trend has diminished for different reasons as the economic crisis, the preference for tourist resorts and cruises, the appellative still esists. It’s as though it’s stuck with us as a trophy. We were born Totucci and Totucci we will die.
On the other hand the people from Palermo, let’s say the city dwellers have their own revenge on the village people calling them “paesani” which means people from the village. Paesani are all those that aren’t from Palermo, even those that are from other Sicilian cities as Messina, Trapani and Catania.
The word paesani intends to be offensive, it refers to people as old-fashioned and ignorant, with a terible accent, ugly, mountainers (even those that come from the sea). They also say they only dress well on Sundays and the women are all dark-skinned, hairy, with moustaches and unified eyebrows.
Of course generalizations are not plausible. Theres a way of saying: “L’immurutu ‘nmenzu a via, ’u su immu un sùu talìa” which means we all se other’s defect and we ignoring our own. If we would consider our own  shortcomings instead of criticizing other’s, maybe we would learn from each other and we would discover a pleasant way of living together.