Home » blog » The Sicilians: Between Acceptance and Distrust 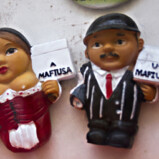 The Sicilians: Between Acceptance and Distrust

The Sicilians, and in particualar the “Palermitani” (the people of Palermo) have always had a strong will to accept others and an openess towards diversity, in part thanks to the many foreigners who arrive daily. Whether it be tourists or workers, a positive atmosphere is always found here.

Our story and our varied DNA has created a load we carry unconciously, which contributes to this: Sicily, in it’s origins and multi-ethnicity, and the Sicilian people, with all our genes, including Arab, Norman, French, Spanish, Piemontese…the list continues, are the fruits of the past colonies which have been here over the centuries. It is enough to observe this in the traits we carry, be it blue eyes and blond hair, olive skin, pale skin, black hair or a fair complexion,.

This history of our conquerors, and the inter-weaving of civilizations and maybe the imprint left by Federico II, the emperor noted for having maintained  in his Palermo court “minds” and “collaborators” of different ethnicities, whom contributed to the fascinating aspects of this city, has determined in Sicilians an openess to accept new-comers, to accept and receive them with every possible grace, to serve them as if for the king himself, to embrace and hold them, as if a baby, and to fill them with food until they burst!

In “the best Sicilian families” you see the chaos that comes with waiting for a relative or friend to arrive. An immigrant family “Americazuela” (how we define Latin-Americans) visiting for a holiday, a child’s friend whom he/she met whilst “ddá fuora,” (abroad) whether studying in another country, or simply in Milan for example, (the people of which are indistinctly referred to as “u milanesi”) which in itself is enough to mobilise an entire family! These families, in preparation, do the shopping as if preparing for Christmas, they offer you the master bedroom, including the embroidered sheets given as part of the wife’s dowry, still new as everyone must have these, but no-one uses them or sees them as “they are difficult to iron, annoying to change and the sheets from the shop are better.”

Then this guest will be given a tour, a dip in the sea at Scopello, a sunset over Terrasini, a walk around a temple at Segesta, but most importantly, eating fish at Sferracavallo, the octopus, bread and “panelle” in Mondello, a trip to Piana degli Albanesi because “no one makes cannoli like they do” (“cannoli” are the typical Sicilian sweet/dessert, made with sweet ricotta and hard wafer. A must try!) The cous-cous of San Vito Lo Capo, a sandwich with “la milza” in focaccia bread. (it’s better not to ask what this is, just eat it and be taken to heaven) This guest will go away weighing ten kilos more than when the trip began, (from only two days) will feel loved like never before, will have the imprints of the embroidered pillowcases on his face, with the need to go on a diet, but mostly, with the wish to return to Sicily.

In these cases our love of diversity is poured out, our love of communication shown, (mostly using gestures, the English don’t speak Sicilian because “we speak with our hands” and they don’t!) but also a spirit a little “subjected,” due to the fact, historically, foreigners dominated us. But our kindness is reserved for temporary visitors, and if we begin to glimpse the threat of a permanent move, things begin to change: the suspect, the distrust; but not in a direct way…

The recipients of racism and of paternalism are immigrants, above all now. Italians are made to consider how the new enemy takes work away and brings disease and illness and up to 1800€ a month from the state… Immigrants are considered indistinguishable among themselves: they come from Tunisia, Morocco, the Ivory Coast, Senegal, Bangladesh, India, Romania, Sri Lanka, Albania. Regardless of their skin colour, their country of origin, or their religious beliefs, they are all defined as “Turks.”

You can be a blond Romanian or the darkest person from Central Africa, in Palermo you will always be a Turk. You see geography is not our strength!

This title of “Turk” descends from before the first millennium, when the first Saracen conquerors came to Sicily. An important historical moment. This title, as well as being slightly generic, is also a derogatory term against “the evil conquerors.”

Now, next to the name “Turk,” “Moroccan” and “Tunisian” are also used (always without a distinguished geographical location) since the first wave of immigrants came from North Africa. Alternatively, they are generically called “vu cumprá” (vendors) even if they are not actually street sellers.

A friend of mine lived by an historical market in Palermo; one day she was approached by a Palermitano, who advised her to be careful on her scooter, as the night before “they stole a Tunisian’s scooter,” and then he turned and pointed out a young Japanese chef who was living in the area for a little while. Very subtle!

Immigrants, disregarding age, social role or gender, are given to, (often in the style of Tarzan with Jane) are spoken to, (like the Indians in American Western films) addressed as friends, and given nicknames seemingly familiar and friendly, but which implicitly signify “you, poor person, I help you because I am a good and generous person, and I know how to resolve every problem, I am here for you, but don’t ever complain, don’t ask for too much and don’t hold your head up. If you behave well like a child I will give you a hand.” Help is promptly given, and as you can well imagine, it’s often a basement, a room for ten people, rented for a huge sum and only in cash, with a job paid in cash, without a timetable and without any protection, but all given with a friendly pat on the back, and 1800€ a month.

That is to say that Sicilians and above all the Palermitanos, until now, have not noticed other flaws that, in other cites, are attributed to immigrants.

They still haven’t, for example, thought to forbid more kebab shops opening with the excuse of the horrible smells or inadequate hygiene standards, because Palermitanos are already accustomed to the numerous smells from the kiosks of the Palermitan street foods, such as milza, various fried foods, and above all, the smell of “stigghiole,” a speciality of Palermo. So, a kebab could never trouble us.

And the voice of the people is heard all over Italy, that immigrants wee freely outside! Personally, I have never seen this happen. I have however seen Palermitos, of all ages, do this, sometimes in the streets, sometimes on the rubbish piles. Maybe it is to mark their territory, or leave their scent, like an air freshener. I would say maybe this is not an ethnic problem, but actually one of gender.

Immigrants are criticised by those people described in this old saying: “The humpback doesn’t see his own hump.” Meaning there are those who consider others to be dirty, (something too absurd to generalise) who then open the window to appreciate the view, whilst looking on to a huge culmination of rubbish piles, which they themselves contributed to.

Another common complaint from apartment blocks is the smell of, for example, Indian food, or spices, which frequently waft around the buildings. But, have you ever noticed the smell in any Palermitan apartment block, especially when someone is cooking pasta with brocolli and cauliflower? An unsuspecting tourist may call the fire brigade to report a gas-leak…If it’s not one thing, it’s another!

Many immigrants nowadays pass us by and head north, as here, there is little work. However many return as they feel more welcome. Besides this, Sicilians co-exist well with others: Indian and Bengalese families picnic in the park next to Palermitan families, young Sri Lankans play cricket or football with young Palermitanos, at the market stalls we socialise with everyone, just like in the past.

Maybe it is true, in Sicily we don’t have much to give people who come from afar, but these men and women have much to give to the people with stay and/or live here: hope for the future, the want to grow together and stand tall, the strength to believe and be better, the possibility to demonstrate just how much we have to give, the ability to recognise ourselves even when fear threatens to bring out the worst in us, and most importantly, the want to be humane, always.

written by our Evelin Costa, translated by our Lydia Bonini