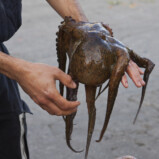 In the summertime the “Palermitani” or people from Palermo, enjoy visiting the nearby fishing villages, a street food favorite is the boiled octopus, or as we say “purpu vugghiutu”.
In the plaza in Mondello you can find many stands where the “purpari” or octopus vendors sell this delicious sea food.
Of course these metal sheet food stands block the beautiful sea view and may not respect all sanitary standards (as most of all street foods). This was the main reason why in the 80’s all the stands in the Mondello square were removed although the complaint of those who loved tasting the hot, boiled octopus enhanced by the sea aroma.
Even though unpleasant to the eye, those metal sheet stands had their lure for the Palermitans as well as for the tourists attracted by its folklore.  For the people from Palermo the hygenic issue doesn’t cause them problems because their stomachs are probably immunized by years of eating all those bizarre and stodgy foods. For tourists, istead, not used to eating this stuff, it may be a sort of “proof of courage”. Actually I’ve never heard of people having problems with Sicilian food while from Mac Donald’s they have!
Getting back to our octopus vendors of Mondello, some of these have transferred to small typical restaurants to continue their tradition.
Boiled octopus can also be found in Sferracavallo, a picturesque fishing village just few miles from Palermo, where you can also enjoy tasty sea urchins and delicious mussels. The boiled octopus tradition can also be tasted in another suburb of Palermo called “Romagnolo” as well as in the historic markets of the city.
The octopus is boiled in big pots, the most traditional are made of clay and filled with sea water. The cooked octopus is then served on large ceramic plates with fresh lemon juice.
The boiling of the octopus follows a ritual in order to obtain the best in flavor and tenderness. The first phase is of course the choice of the right octopus: the females are more tender but there is also a specific octopus called “maiolini” as they are born in the month of May. We can distinguish this species as they have a double row of suction cups on each tentacle.
To cook an octupus successfully the secret is to add sufficient salt to the water, since using sea water may not be so easy. When the water boils you must dip the octopus holding it from the head (that is its stomach) for three times before immerging it totally in the water. Besides making the octopus more tender, this method makes the tentacle curl upwards and noone from Palermo would ever do otherwise.
After the water returns to boling temperature you must let the octopus cook for twenty minutes, keeping the lid slightly tilted. After twenty minutes, shut the lid, turn off the heat and leave the octopus in the hot water for another twenty minutes. This way you will certainly have tender boiled octopus. As you can see even being an octopus vendor is an art!
True octopus lovers prefer eating the octopus plain with fresh lemon juice. When the octopus is fresh (but I mean really fresh, just caught), you can even eat the interior of the head that has the real sea flavor. The color of this “cream” is not what I would define appealing, but the flavor is an unforgettable palate experience.
Boiled octopus can also be prepared as a salade, cut in bite-size pieces and added with olive oil, lemon and fresh parsley.
A curiosity: in Sicily when the expresso coffee results diluted or, as we say “weak”, with a disgusted expression they say.”What is this, octopus water? (the brownish/purplish water in which the octopus has been boiled).

There are no photos with those IDs or post 6936 does not have any attached images!