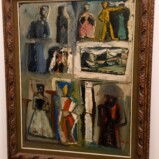 In one of the prestigious locations of the 2nd International Biennale of Art of Palermo, will be the awesome setting of Sant’Elia Palace in via Maqueda (historical central position of Palermo). This Palace has been built over the old building of the XV/ XVI century, and it’s only in 1756 that it appears as we see it now, becoming one of the most lustful palace of Palermo.  After it has been in the hands of different owners, in 1984 became, after a long process of restoration of the Provincial Administration and since 2007 used for public events and exhibitions. Sant’Elia Palace is an international point for the important art exhibitions it hosts.
The exhibition is from 11 January to 25 January 2015. The list of various artist you cen see on following link: http://www.biennaledipalermo.it/en/